Reigning RX150 Rallycross Champion Chrissy Palmer remains unbeaten in the competitive series this season, following victory at the sixth round of the championship at Lydden Hill on Bank Holiday Monday, where the RX150 division produced close action-packed racing on the MSA British Rallycross Championship bill.

Palmer didn’t have it all his own way in the qualifying races, the former Formula Ford Festival winner forced to fight his way through the nine-car field in Q1 and only just passed Swedish driver Mikaela Ahlin-Kottulinsky in the final corners to set the fastest time. In Q3, while newcomer Kirk Langley set the quickest time, Palmer spun his buggy and ended up fourth.

Two fastest times were good enough to secure Palmer pole position for the final, with Stephen Jones alongside and Ahlin-Kottulinsky completing the front row.

As the lights went out, Palmer led into turn one and would never look back, while Jones dropped to fourth behind Ahlin-Kottulinsky and Langley. However, contact between the pair at the North Bend Hairpin sent Ahlin-Kottulinsky into a spin, dropping her to the rear of the field. Jones climbed to second, while Langley dropped behind Mitchel Flaherty into fourth.

As Palmer stretched his legs to secure his sixth successive victory of the season, he wouldn’t take maximum points for the first time this year. Jones claimed the bonus points at the event for setting the fastest lap in the qualifying races, and finished second in the final to close the gap to second position in the standings to a single point, as rival Jake Harris had a half spin in the final and finished fourth. LOCO Energy Drink supported driver Kirk Langley claimed a debut podium in third.

Flaherty dropped to fifth in the closing stages of the race, while Ahlin-Kottulinky –
making her second appearance in the ODYSSEY Battery celebrity buggy – recovered to finish sixth. Adam Sargent, Larry Sargent and Kevin Feeney had an action-packed final further down the order and finished seventh, eighth and ninth.

“That was very enjoyable! In the early races I wasn’t myself, I was trying a bit too hard, but the big grids were very enjoyable to race in,” said Palmer. “It was a great day’s racing, it always is at rallycross. You can’t have much more fun than this. In the final I sorted myself out and got on with it. It’s great to win again and I’ll be pushing hard to continue that in the last two races this season.”

RX150 Rallycross Championship promoter Ollie O’Donovan was pleased that Palmer was forced to race hard in the qualifying races, and enjoyed having Ahlin-Kottulinsky and Langley join the action. “There isn’t much more I can say about Chrissy that I haven’t already said this year. He is a very good driver and he is totally on top of the buggy. It’s a joy to watch the way he throws it around and it’s good he had to race for it through the pack this weekend,” said O’Donovan. “The racing was very good, having nine buggies all heading into one corner produces great action. I’m disappointed that Kirk and Mikaela had contact in the final because I think Mikaela would have been on the podium, but it was great for Kirk to finish on the podium in his first outing.”

The next round of the RX150 Rallycross Championship takes place at Pembrey, South Wales, September 25. 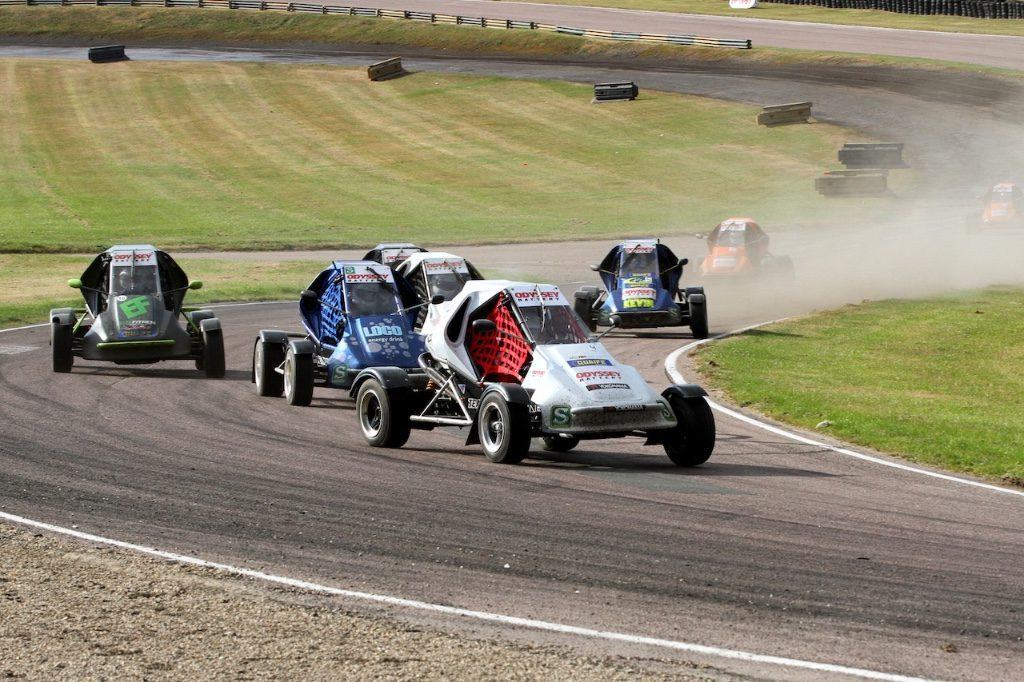