Former British Rallycross Champion Ollie O’Donovan experienced a turbulent weekend at the French round of the FIA World Rallycross Championship at Loheac (September 4) in front of over 75,000 people, but made progress with the Team RX Racing Ford Fiesta.

Competing against some of the very best drivers in the world, including nine-time World Rally Champion Sebastien Loeb, three-time FIA World Champion Petter Solberg and two-time DTM Champion Mattias Ekstrom, O’Donovan’s weekend got off to a strong start by winning his race on track in Q1 and setting a solid 21st fastest time. Anther good start in Q2 was followed by disaster, as the Team RX Racing Fiesta was hit in the rear by another car, breaking a wheel and forcing O’Donovan to retire from the race.

Planning a fight-back on day two, O’Donovan lined up in an early race in Q3. With rain having fallen just minutes before, the track was at it’s most slippery and O’Donovan slid his way through the race in conditions that normally suit the Irish driver, to set 22nd time of the event’s 31 starters. As a mark of how difficult the conditions were in Q3, even Sebastien Loeb made a number of mistakes in his race.

Another trademark strong start was to follow in Q4, where O’Donovan slotted into second position at the first corner, but was hit by another driver in turn two, sending the Tony Bardy Motorsport prepared car into a spin. As testament to the strength of the team’s Fiesta, little damage was done and O’Donovan was able to complete the race and even set lap times faster than his nearest rivals.

Despite the challenging weekend in France, O’Donovan enjoyed being part of the biggest rallycross event in the world as he assesses which championships to race in next season. “We brought some good updates to the Fiesta for Loheac and I was really looking forward to using the extra power we have now. The first day was good, despite not finishing Q2 after we got hit. But, I was very disappointed with the second day. I’m usually very confident in mixed conditions but we struggled. We didn’t have the setup perfect and I wasn’t driving as well as I could have done by any means,”he said. “I really enjoyed the atmosphere of the event, we had a really good time there and I do really like the circuit. I like the tight and twisty nature of it, but some weekends don’t go to plan. We are all really looking forward to Barcelona next week, where we had a really good result last year.” 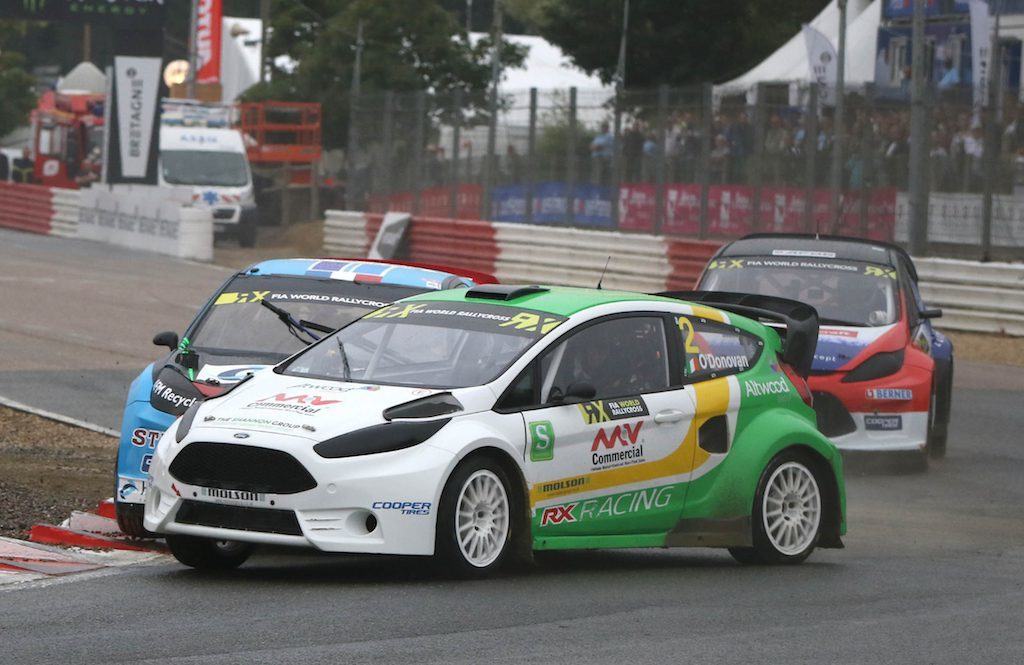