Multiple event-winning rallycross squad Team RX Racing will contest the opening round of the FIA European Rallycross Championship at the Circuit du Barcelona-Catalunya Formula 1 venue in Spain this weekend.

Irishman Ollie O’Donovan will race the team’s Ford Fiesta Supercar in the event, following a maiden podium finish of the year in the opening round of the MSA British Rallycross Championship last week, racing his Ford Focus Supercar.

O’Donovan has been a regular competitor in Euro RX since the start of 2015, and twice finished fourth overall that season, in Norway and Spain. Last year, the team’s best event was at Riga in Latvia, where O’Donovan just missed out on making it into the final.

Following its European campaign, Team RX Racing raced at the final round of British RX with the Fiesta last season at Croft, where the 2007 British Champion claimed his second victory of the year.

The Fiesta has undergone a range of updates over the winter thanks to the hard work of the Tony Bardy Motorsport engineers, and will run in an interim engine setup this week, before full revisions for the 2017 season are introduced in coming events.

“I’m really looking forward to racing in Spain this weekend,” said O’Donovan. “This is one of the newer circuits on the calendar, but it’s a real challenge, with a mixture of corners. It’s been good to see the event grow year-on-year, the Spanish fans are very enthusiastic and we have been fast there in the last two years.”

The FIA European Rallycross Championship features 29 permanent entries this season, with 32 drivers set to take the start of the event in Spain this weekend. O’Donovan is aware of the challenge that lies in wait for the small team, but is confident that it can punch above its weight.

“The strength and depth of the European Championship is massive this year. There are some teams that have stepped down from the World Championship, and a number of what can only be considered as professional drivers. These guys are in cars all the time, and have done a lot of pre-season testing. The first time I will sit in the Fiesta since October will be for practice in Spain on Saturday morning, but using my experience as a driver and Tony (Bardy’s) huge experience of top-level rallycross, I’m confident we can be in the mix.”

The Team RX Racing Ford Fiesta Supercar was revealed to the public at the Autosport International Show in January, adorned by its 2017 livery, comprising of primary sponsors LOCO Energy Drink and The Shannon Group. 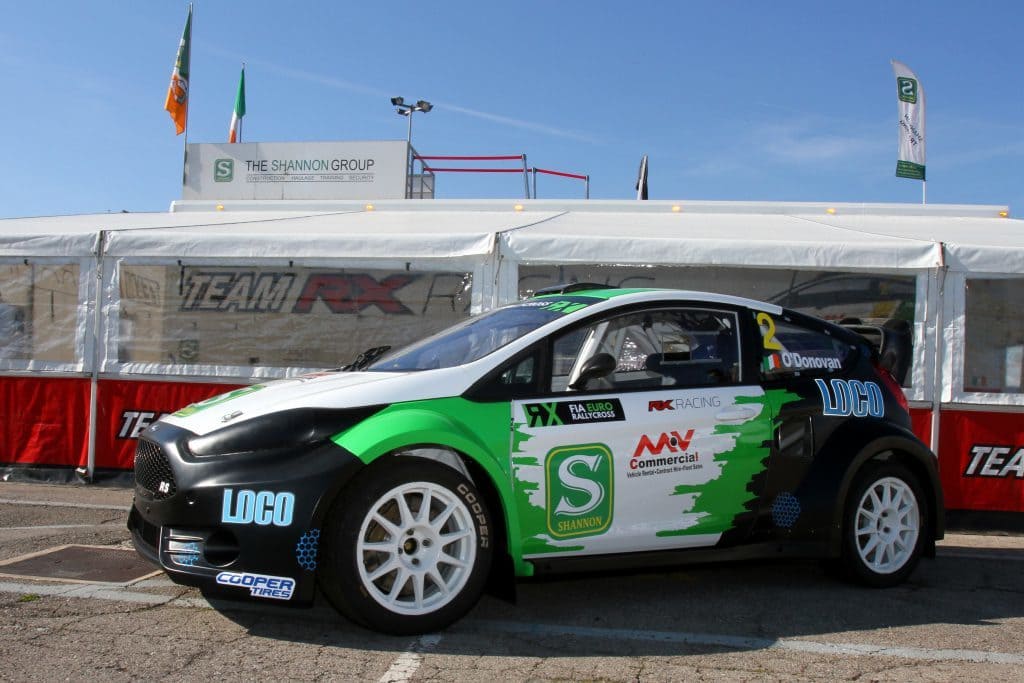