Reigning RX150 Rallycross Champion Chrissy Palmer was undefeated throughout the third round of the single-seater buggy series at Pembrey in South Wales to claim his second victory of the season and close the gap to points leader John Ward, who finished third (June 25).

Racing on the newly revised loose-surface layout on the Welsh circuit, Palmer started on pole position for the final, joined on the front row of the grid by Kirk Langley and Ward, who had won the second round of the series at Lydden Hill.

Palmer made the best start to take the lead into the tight first corner, followed by Ward and former double-champion Marc Scott, who climbed from the second row to be third on lap one, as Langley dropped into fourth place.

Scott moved up to second with a move through the Honda Curve final corner and into the hairpin for the second time of asking, Ward dropping to third where he would stay to the finish, fending off the attentions of Langley and later also Stephen Jones.

Palmer was never headed, leading home Scott and Ward, while Langley and Jones were close behind in fourth and fifth at the flag. “It’s an amazing feeling to win at Pembrey, I felt that I put everything into the race and also learning the new layout was a lot of fun, yet a big challenge,” said Palmer. “The new layout is great and I will enjoy making the trip there again next time. Seeing Marc spurred me on, it was great to have him back on track and I’m really looking forward to Mondello now. We still have a small problem with our buggy that we can’t find, but we have time now before Mondello. Overall it was a great weekend and a good points haul.”

Further down the order, Jake Taylor ran sixth throughout the final, while experienced Supercar racer Steve Harris deputised for son Brett – who was unable to attend the event due to health reasons – and passed the ever improving Georgia Shiels around the outside of the second corner on lap four, to claim seventh. Mitchell Flaherty was unable to start the final due to technical problems.

“Chrissy drove very well all day at Pembrey and deserved the win. John wasn’t able to repeat the form he showed at Lydden Hill, but that keeps the championship battle wide open,” said RX150 promotor, Ollie O’Donovan. “It was great to have Marc back racing an RX150 and he left Pembrey keen to come back for more this season. Both he and Chrissy were very close last time the championship went to Mondello Park, where the next round will take place, and with the addition of John’s local knowledge, I think we could be in for a treat at the next round too. It was fun to have Steve back in a buggy again, but we also hope that Brett is fit enough to return for the next round.”

The fourth and fifth rounds of the RX150 Rallycross Championship will take place at Mondello Park in Ireland on July 22nd – 23rd. 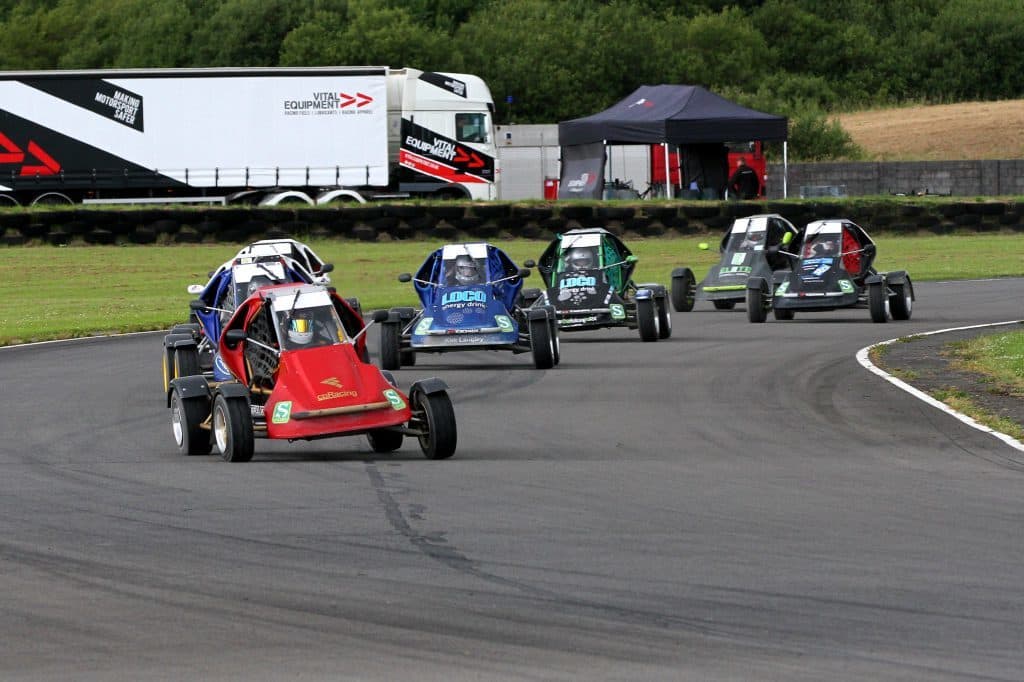