International rallycross squad Team RX Racing and driver Ollie O’Donovan had its chances of success in the sixth round of the MSA British Rallycross Championship at Lydden Hill on Bank Holiday Monday destroyed by punctures in both the semi-final and final, despite qualifying second (August 28).

Second fastest in Q1, 2007 British Rallycross Champion O’Donovan was fourth in Q2 and second again in Q3 to be second overall in the Intermediate Classification, securing pole position for semi-final two.

O’Donovan entered the event needing a solid result to move up the Championship standings, but while leading the semi-final and set to line up on the front row for the final, his Ford Focus Supercar suffered a front-left puncture. The resulting fifth-place finish meant he would not have made the final, but for friend and Team RX Racing colleague Steve Hill withdrawing from the main event to allow O’Donovan to take the start and keep his title hopes alive.

An early joker in the final put O’Donovan in contention for a podium finish, until the car suffered another front-left puncture. Despite only finishing seventh, the former rally driver remains third in the British RX standings with three rounds of the series remaining.

“We really needed a good result at Lydden to fight for the title, and we were hugely unlucky to have two punctures one after another in the semi-final and final. We had the speed to finish on the podium at least, so it’s very disappointing,” said O’Donovan. “I must say a massive thankyou to Steve for letting me start the final, it was a big gesture from him and I really appreciate it. It’s just a shame we couldn’t score the result we could have done without the punctures, but that’s motorsport, and the extra few points we scored could be crucial at the end of the year, we’re not totally out of the title hunt yet. Well done to the three guys who finished on the podium, it’s great to be racing with the newcomers in the series this year.”

Also racing under the Team RX Racing banner at Lydden Hill was former RX150 racer Kevin Feeney, who campaigned his Ford Escort MkII in the Retro Rallycross Championship and challenged for victory throughout the qualifying stages and the final, narrowly missing out on an overall win and scoring a strong second place finish.

Team RX Racing left Lydden Hill heading straight for arguably the biggest rallycross event in the world, at Loheac in France. The squad has raced at the iconic French venue for the last few years, but this weekend will compete in the FIA European Rallycross Championship as part of its full programme of 2017 Euro RX events. At the opening round of the year in Barcelona, O’Donovan became the first ever Irishman to finish on the podium in Euro RX Supercar, and is hoping for solid pace this weekend aboard the team’s Tony Bardy Motorsport-run Ford Fiesta Supercar.

“Loheac is an awesome circuit and I’ve really enjoyed driving there in the past,” said O’Donovan. “In the last few years we’ve raced in the World Championship; this time we’re battling for points in Euro RX. The Fiesta is looking fantastic after our roll in British RX at Mondello Park last month thanks to the hard work of Tony, Sam and the guys, and I can’t wait to begin practice. Hopefully my previous experience of the circuit will help us achieve at least a semi-final (top 12) position this weekend in such a strong 35-car field.” 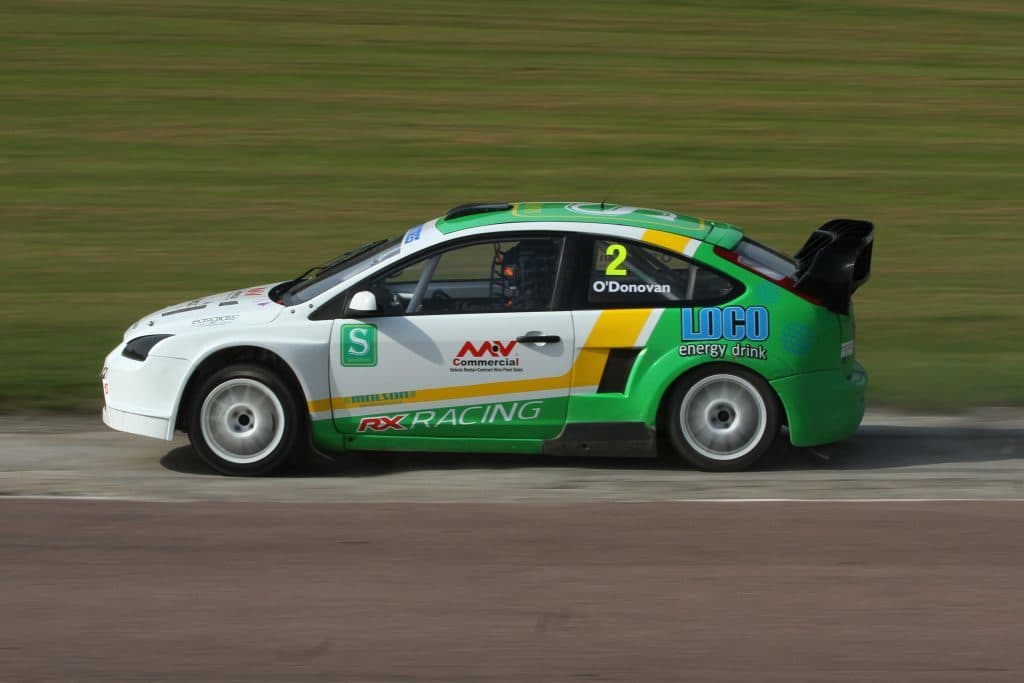