Three-time RX150 Champion Chrissy Palmer heads the line-up into the opening round of the season, but is joined in the class by winners and champions from the FIA World Rallycross Championship, British RX and the RX150 buggy category.

Starting their 2018 campaigns at Silverstone, John Ward, Stephen Jones, Georgia Shiels and Palmer will be hoping to get their seasons off to the strongest possible start, but will be accompanied by a trio of additional entries on the grid.

Swedish driver Kevin Eriksson, winner of the German round of World RX in 2016, will race an RX150 for the first time this weekend. Despite living in Scandinavia, Eriksson has never previously competed in a rallycross buggy, but began his career in folkrace before moving to rallycross and winning international series’ in the single-make Supercar Lites category. Moving to Supercar, he has twice won the RallyX Nordic Supercar title, and has been a regular front-runner in World RX for the last two years.

“It will be a great opportunity for me to try out the brand new World RX track at Silverstone and at the same time have a lot of fun. The RX150s look like they are a lot of fun to drive,” said Eriksson, who will use the event to prepare for the World RX round at the same venue, in May. “This will be my first time racing a buggy so I’m looking forward to a new challenge. Thanks to Ollie O’Donovan for offering me the opportunity to come over and race, I can’t wait to get started.”

Reigning MSA British Rallycross Champion Nathan Heathcote, who won the British RX Supercar title at this first attempt last season, will race in the World RX supporting RX2 International Series this year. But, this weekend, he will make a one-off appearance in an RX150 buggy to help improve his skill set and to also learn the Silverstone circuit. “Racing the buggy will be really good practice for when the RX2 series goes to Silverstone in May and that’s the idea of the weekend, but as always I’d love to get on the podium,” he said. “The RX150 is like nothing I have ever driven before but I’m really excited to get behind the wheel and see how I get on. Having ‘GB1’ on my buggy will really be something special, although I’m sure it will make me more of a target.”

Both newcomers will prepare with a short test session in the 1000cc, 430kg buggies on Friday, while the regular RX150 racers are ready to battle for podium finishes and a strong position in the overall standings.

Palmer claimed his third consecutive title last season, but faced stiff opposition from Irishman John Ward, who scored victories in his first RX150 campaign. Ward has his sights set on the title this year. Stephen Jones has consistently finished on the overall RX150 podium in recent seasons and begins his year at Silverstone aiming for the top spot, while former rally driver Georgia Shiels switched disciplines for 2017 and improved her performance every time she stepped aboard an RX150. The University of Bolton student is targeting her maiden podium finish this weekend. Former RX150 champion Leo Foster completes the line-up, returning to compete in a single-make, single-seater buggy for the first time in a number of years this weekend.

“I’m really looking forward getting going again,” said triple-champion Palmer. “We’ve fixed the problems we had at the end of last year and hopefully we can be back on form from the first round. The buggy feels amazing, the guys have done a great job and I can’t wait for to take on the challenge that this season will bring. Silverstone looks like it will be a great weekend.”

RX150 Championship Promotor Ollie O’Donovan is looking forward to the 2018 season getting underway. “We’ve made some developments to the buggies over the winter and we’re all looking forward to the new season,” he said. “Silverstone will be a new challenge for everyone, the big jump will be a new factor in racing an RX150 in British RX events, and the competition will be stiff. Having Nathan, Kevin and Leo join the line-up means it will be impossible to predict the podium until after the final on Saturday afternoon.”

Event information can be found on the MSA British Rallycross Championship website. 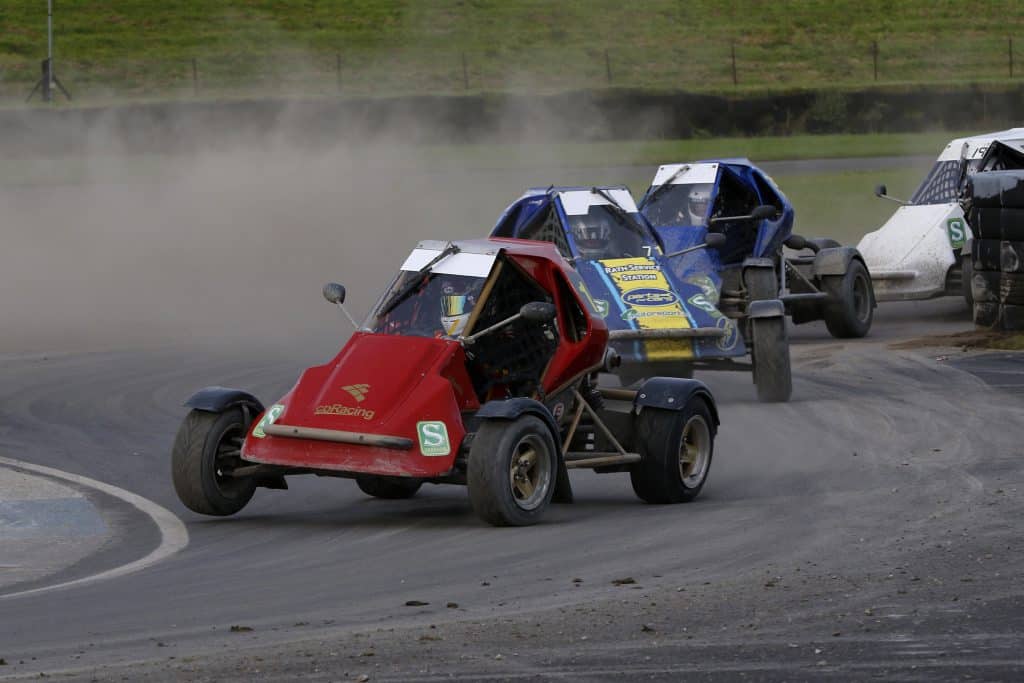