Racing a 1300cc single-make Suzuki Swift, Patrick O’Donovan qualified on the front row of the grid for the final and took the lead of the race in wet and slippery conditions around the outside of the first corner.

In only his third rallycross weekend, the young driver battled for the top positions against drivers with far more motorsport experience and finished the race second. His performance went far from unnoticed as he was also scooped the ‘Driver of the Day’ award.

Ollie O’Donovan meanwhile entered the event on the back of a hat-trick of MSA British Rallycross Championship victories, but electrical issues in Q1 and Q2 slowed his Ford Focus Supercar, before the 2007 British RX Champion was forced to skip Q3 altogether.

But, thanks to the hard work of the Tony Bardy Motorsport-run squad, the Team RX Racing driver was able to line up on the second row of the grid for the final, from where he climbed to third position by the first corner. But, in the middle of the race, held in torrentially wet conditions, he clipped a kerb and broke the car’s suspension, dropping O’Donovan to sixth. The Irishman now lies second in the standings, just one point off the lead.

With just three rounds of the series remaining it’s all to play for. At the end of the season, all drivers must drop their two worst scores, but must count the final round at Silverstone in November.

“What a weekend. I’m delighted for Patrick. He has done a lot of driving at home in the field, but to race against other drivers, many of who are very talented, is a very different proposition,” said Ollie O’Donovan. “He drove brilliantly in the wet and difficult conditions. I was really impressed with his drive in the final especially, he made a lot of brilliant starts and didn’t succumb to the pressure at all. He had a good clean fight for the win and to finish second and get the driver of the day award in only his third event is special for all of us.”

“From my side, we had a difficult day. The boys worked really hard to solve the problem with the car in qualifying and did a great job to get us out for the final. It was just driver error that broke the suspension, the conditions were really tough. I almost held onto fifth but couldn’t quite drag the car home in the end. We’re still right in the fight for the title and we will keep pushing in the next round at Lydden Hill.”

Patrick O’Donovan was overjoyed to stand on the podium. “It was a really good race, it was quite slippery on the track, like driving on ice but once we got out there it kind of dried up towards the end of the day. I felt quite comfortable on the gravel because it was quite nice and slushy, just how I like it at home,” said Patrick O’Donovan. “I felt more comfortable in the car than I did at Pembrey. I’m really looking forward to Lydden next, I’ve never been there before so it’s going to be new like every other track, but I’m looking forward to it.” 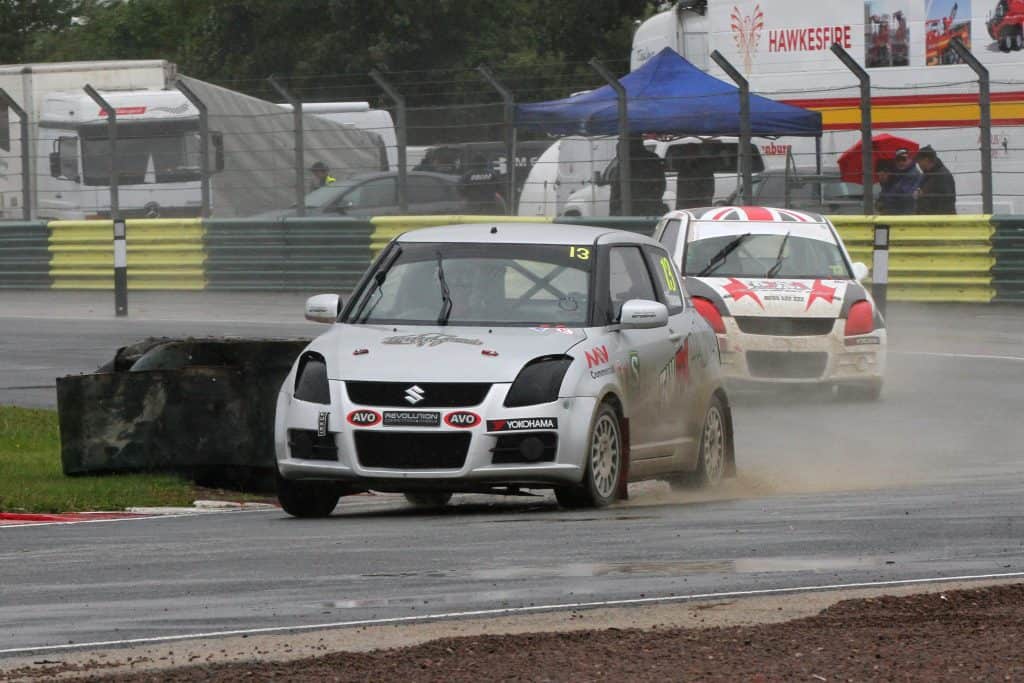